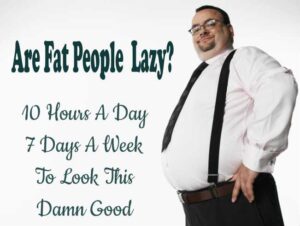 I recently watched a comedy sketch posing the question ‘are fat people lazy’ and funnily enough I was at the time walking on my treadmill while doing some basic arm weights. I couldn’t watch the whole sketch as it was making my blood boil.

Ironically tho, seeing everyone laugh at this form of so called comedy was spurring me on to work harder. Even tho I know I’m not lazy, yet I’m still overweight, I get a feeling of insecurity about the whole topic.

Looking at people that don’t fit within the slim BMI calculator as an inferior group, not worthy of the respect and dignity that is owed to any human being is, unfortunately, an age-old discriminatory practice in our society.

The idea that it’s fine to do this and being validated by stand-up comedians who make jokes about fat people to get some laughs makes it even more repulsive. The fact that they do get laughs is part of what makes it not funny at all, well to me anyways.

The idea that the plight of fat people is their own fault is another validating factor in making it seem okay to discriminate against them. Because people think all bigger folks can control their weight if they really make an effort, fat and lazy have almost become synonyms. The reality is that uncontrollable factors are often the cause of carrying excessive weight.

Are Fat People Really Lazy Or Just A Bunch Of Excuses

Sadly one of my earliest childhood memories takes me back to the early years of primary school. When I look back at it now, I find it pretty sad that kids of that age have already learned how to fat shame people. Which is just horrible.

As a young boy, I didn’t consider myself lazy. In fact I was always playing sports after school and mucking around with kids in the street. But for some reason, at the age of roughly 9, I had man boobs and a bit of a stomach.

So needless to say I was a target for the school bullies. I was told that I had bigger boobs than this particular girl in my grade. So not only were they bullying me, but they dragged some poor innocent girl into equation.

Anyways, point of the story is that laziness is not a direct result of being overweight. Or vice versa. I’ve never considered myself lazy, but for some reason I’ve always been a big man. There can be underlying issues that contribute to not fitting into the BMI standards.

But in the eyes of many people, this is just a bunch of excuses to justify being lazy. While I’m not saying that all of us overweight people have some form of disorder making us heavier, as I’m sure there are cases of pure laziness leading to a less healthy lifestyle.

But for some overweight people, laziness has nothing to do with it. There’s plenty of reasons why people can eat healthy, exercise yet not lose the bulge. But to stereotype us all into the lazy category is just pure wrong.

So with that said, lets have a look at some of the reasons which make losing weight difficult. 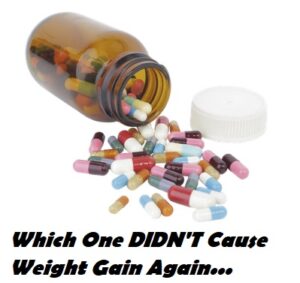 Medications that may cause weight gain can include:

I’m sure you would have heard the term fast metabolism before, referring to ones ability to eat more food and not gain weight as a result of their metabolism. People with a fast metabolism generally have a higher Basal Metabolic Rate (BMR).

What this means is that someone with a higher BMR will burn a larger amount of calories in rest mode. So by doing absolutely nothing at all, their bodies can use more calories because its said that our bodies BMR accounts for about 60 to 75% of calorie intake.

When you’re someone with a slow paced BMR, your body will use up less calories in a stationary position. As over 60% of your calories are used here, someone with a low BMR is going to have used up a lot less calories which can result in weight gain compared to someone that uses more calories during the bodies rest mode.

So is it fair to say one person is lazy when there are two people doing absolutely nothing, but only one person gains weight from it, I didn’t think so. 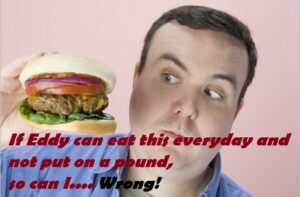 Recently, there have been some astonishing results from scientific researchers in Israel on the subject of weight loss. Their research project proved that because all people do not metabolize the same healthy food the same way, people strictly adhering to the same healthy diet will have amazingly varied results.

Some of these people will lose weight, others will show no difference and others will gain weight. So there’s no such thing as the perfect diet for weight lose, in fact some diets may even encourage you to put on weight as a result.

We can easily see, therefore, that the general idea that fat people are just too lazy and eat all the wrong foods to put forth the effort to lose weight is really no more than an ignorant, uneducated meme.

Still, this knowledge doesn’t help obese people who remain the butt of nasty jokes, discrimination and humiliation. In fact, the derision causing anxiety and stress can also be a factor in their weight gain and inability to shed the pounds.

Stress & Anxiety Can Cause Weight Gain

Chronic anxiety and stress can play a great role in hunger increase. A hormone produced in the body called cortisol, also referred to as the stress hormone, rises when people are stressed. The blood-sugar level in the body decreases, causing cravings for sugary foods and fatty foods, metabolizing into sugar to compensate.

It becomes obvious, then, that all of the derogatory remarks aimed at the obese have a strong, negative impact. Furthermore, the anxiety and humiliation from bullies with vicious words can cause deep emotional trauma leading to depression and, in the worst case, suicide. As the popular saying goes, “If you’re not part of the solution, you’re part of the problem.”

Break The Mold – Prove Them All Wrong

While people can be pretty down right mean, its how you react to it that counts. One way to turn the tables is to go the extra mile to prove to these people that you’re not lazy. But as you’ve seen above, external factors can influence your body weight and shape.

Certainly, whether or not outside factors are mainly the cause of obesity in any given case, pursuing and maintaining a healthy lifestyle are goals for everyone.

The importance of following a healthy diet could consist of plenty of fresh fruits, vegetables and foods high in protein like nuts and non-fatty meats can probably go without saying. Avoiding certain foods may also prove beneficial. It’s also best to seek professional advice in regards to your diet. 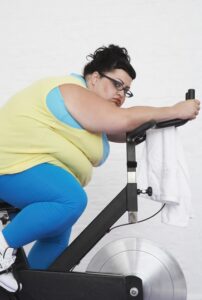 When it comes to exercise however, more strenuous regimens can be problematic for the overweight. It’s kind of a vicious cycle, which can be hard to get out of. Exercise is hard for obese people, but non exercising can make the situation worse. Still, there are options for obese people to get exercise in.

1. Walking is probably the most universally agreed upon form of good exercise for almost anyone. Initially, it’s not so much to shed pounds. The point is to get you up and moving. Physical movement at your own pace as opposed to sitting for long periods of time is going to benefit your health tremendously.

I have taken to walking on a treadmill for 30 to 40 minutes a day set at my pace and incline. This way there is no excessive pressure and unwanted eyeballs on me. Start watching a series on Netflix while walking on the treadmill, you’ll be amazed at how quickly the time passes.

2. Overweight people can do yoga as well. While it’s not the most calorie burning routine in the world, it does give you confidence and increases your balance and strength.

3. Dancing is another great way to get moving. Exercise should be something you enjoy to ensure you’ll look forward to it. In the early ’80s, a fitness guru, Richard Simmons, once obese himself, had a TV show catering especially to the obese.

His lively dance routines to popular music made exercise enjoyable. You can dance to any music of your choosing, but the video will give you some ideas to start you off. Why not invite an overweight friend over to dance with you?

Most fat people are definitely not lazy. It’s only society’s uniformed perception. Breathe deeply and love deeply. Use people’s negativity as your positive.

Self Value: Am I worth It? As somebody who’s suffered from serious self esteem issues for as long as I can remember, […] 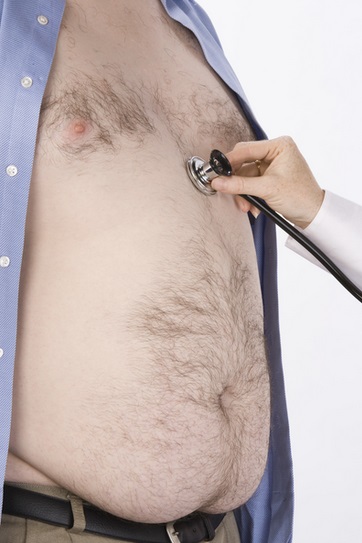 Sleep Apnea is a fairly common sleep disorder that causes interruption to your breathing while you’re sleeping. But is there any connection […]

Over the past 30 years the number of children who are overweight or obese has tripled according to heart.org. With statistics of […]

As much as people would like to blame several things for their back pain, in many cases, it’s simply a matter of […]