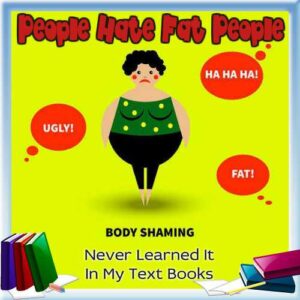 Human beings can be so king and gentle with one another, yet so horrific and cruel at the same time. When you don’t fit into societies view of acceptable, people just turn nasty. Being overweight is one of these areas where its deemed unacceptable. So why do people hate fat people?.

Whether your obese, a drug addict, a booze hound, from another country, speak differently or even a cigarette smoker, people are very quick to judge. But from what I’ve experienced living on the same Earth as these people, is that fat people like myself seem to cop it the most.

What happened to freedom of choice, individuality and so forth. Why is the way I look so offensive to you where you insist on fat shaming. Or does the fact I like to have a beer after work make me less of a human worthy of your time?.

While I’m certainly no Doctor, psychologist or have any greater insight into the human brain than anyone else, I have always gotten the feeling that people hate overweight people more so than any other social ‘misifit’, is because we control our own body weight.

Therefor its deemed our own fault for being heavy which apparently gives them a the rights to fat shame and carry on being cruel. ‘Its your own fault that you’re fat, so I’m going to judge you for that and dislike you more than anyone else’.

Its Not Always Our Own Fault

But the truth of the matter is that, being overweight or obese is not always a direct result of us heavier people being lazy or eating too much junk food. Sure there are going to be a lot of people that are overweight whom don’t exercise or eat healthy at all, but not all.

So one should not be judging someone based on their weight regardless. But the sad reality is that people get a sense of achievement or fulfillment within themselves as a result of bringing someone else down, in turn making them look better.

Go On A Diet You Fatty 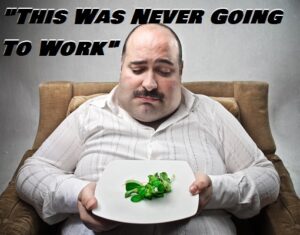 So in a way, it may seem like this person hates fat people by saying something like ‘go on a diet’, its actually the other way around. The skinny person is looking for assurance in them self. By picking on your flaws they are making themselves feel like a superior human being as they don’t need to do anything special to look the way they do.

In case you’ve been living under a rock, for the last 40 to 50 years, people in the USA particularly are getting bigger in size. More and more people are being classed as obese every year.

Now diets are certainly no brand new flashing idea to help you lose weight. They have been around for a very long time. So my question is, does dieting really work?. As a nations gets larger in body size year in year out, something tells me that either no one is dieting or diets simply don’t work.

We all know people that do dieting, so we know its not that no one is not dieting. I know people that have even passed out as a result of following a diet. Sure some diets can help you lose weight combined with exercise, but many aren’t sustainable and there are studies out there showing that 95-98% of dieters fail and end up putting on more weight than they lost. 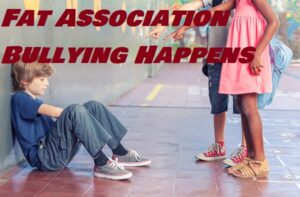 Its deemed not fashionable to like or hang out with someone that is quite overweight, especially during school years. From a young age, its being drummed into our heads that fat people aren’t cool to be seen with.

Even if you’re not the overweight kid at school, you are witnessing fat shaming and overweight kids being bullied. This can have an effect on the way you think about overweight people from that moment on.

It can go one of two ways. You subconsciously join the bullies and look down on overweight people in fear of public shaming, or you can emphasize with the bullied kid and take the more challenging yet rewarding path.

Its estimated that 10 percent of the health bill for this nation is a direct result from chronic obesity conditions. 150+ Billion dollars for extra medical care subsidized basically by the skinnier folks.

I can understand the grief and angry people may feel as a result of these findings. But the truth of the matter is, it’s not the heavier persons fault. Its the governments fault. Us regular folks don’t make the rules and you shaming on us for it is not going to change it either.

From an employers prospective, it can cost them hundreds of thousands of dollars extra due to obesity related expenses, this is for companies that hire quite a substantial amount of people (100+).

From a big persons prospective, life insurance can be challenging enough, but to increase health insurance costs would surely cause a lot of people to a lifestyle no one dreams of.

People can be quite picky and judgmental if they want to be, whether you’re overweight or not. Some people just don’t like people that wear glasses for whatever reason. But as a fat person, the reasons people may find offensive can include: 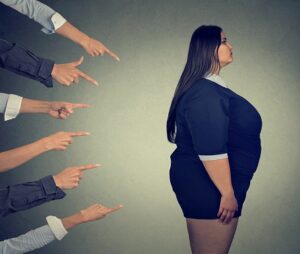 As much as society has progressed in the world of equal rights, its fair to say that Women whom are obese will be shamed more so than a male. But why, why do people hate fat females?.

Its been sewn into our subconscious that a woman should always look tidy, upright and classy. Being overweight is not one of the ideas that have been implanted into our brains throughout history.

So people constantly battle with the thought of a overweight woman starring in a hit movie, baby sitting the kids, being a role model, teacher, being in the public eye as a celebrity, think about how much fat shaming Roseanne copped in the 90’s.

Women feel the grunt of shaming along with self esteem issues the most. Because of the idea that they have to look thin, beautiful 24/7, they become a much easier target for bullies. Which is just wrong.

When the product (person) doesn’t fit the mold (our pre-installed ideas), disappointment, anger, rage and all the things that make people so cruel can come out. Unfortunately in todays technological driven world, its far easier to call someone fat from behind the computer screen than it was 10, 20 years ago.

Don’t Hate Us, Help Us

What most fat people have to endure on a daily basis is stupider than what most people have to deal with in a year. The world is already full of bigotry, don’t add to it.

Hating on someone that is obviously dealing with enough trauma and having a hard enough time as it is, is simply being a school yard bully. Remember, NOBODY likes a bully.

Just one simple verbal outbreak cause have drastic effects on someone with low self esteem and is living life on the edge as it is. Imagine the horrific consequences and the way you would feel if you were the straw that broke the camels back.

Fat shaming has been proven to not help the person dealing with weight issues, in fact it does the opposite. It can deter people from visiting their Doctor, building up the courage to go to the gym and in turn stay in their safe zone (at home on the sofa).

Humans will never change and we will always continue to insult and offend other humans. Whether on purpose or by accident, it […]

While futons come in a variety of styles and shapes, when it comes to futons for heavy people, the number one factor […]

One thought on “Why Do People Hate Fat People”