The Link Between Depression And Weight Gain 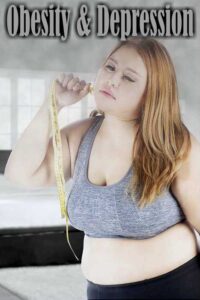 Depression and weight gain are serious issues which unfortunately affect each and every one of us in one way or another. To understand and differentiate one from the other, its important to realize that there is a link between obesity and depression.
It’s not uncommon to be suffering one condition and have the second as a direct result. This is why obesity can cause depression and vice versa. However, before we get into it, I want to first briefly explain what both depression and weight gain are so you can see how they are connected and how its impacting millions of people worldwide.

Depression Affects More Than You Know

Did you know that on average, an American adult has a 15% chance of experiencing feelings of severe depression? Depression in it of itself is not uncommon, however, it becomes serious whenever the feelings of depression engulf someones emotions and thoughts constantly. There are a variety of factors involved in feelings of depression, many of which we will get into today.

With regard to weight gain, more than two-thirds of American adults are either overweight or obese. There are a variety of factors associated with weight gain such as medication, hormones, poor diet, lack of exercise and so on. But today, we will specifically be looking at its correlation in terms of depression.

Can Obesity Cause Depression? 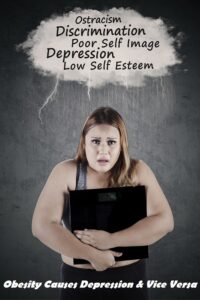 Obesity and depression have long been thought to have a direct correlation to each other. There are several ways through which obesity may cause depression. First of all, obesity is believed to increase the risks of depression due to psychological reasons.
To be more specific, overweight individuals feel bad about their body image, often leading to depression.When you live outside the stringent bmi guidelines, its easy to be discriminated against as a larger person.
So not only does one feel self conscious about their body weight, but also lack confidence in general day to day activities like sitting on a bus and going about their daily work procedure. All this self doubt and negative thinking can lead to depression.

Another explanation indicates obesity can cause a wide variety of health problems which lead to depression. Because there are a number of health concerns connected to obesity, ones mindset may be negatively impacted. This can result in a lack of willingness to stay active, socialize and do the normal day to day activities.

Obesity Does Cause Depression

While people that have never been on the end of fat shaming may not quite understand the correlation, the truth is obesity does cause depression and its a serious issue that should never be made a joke of. No one deserves to be made fun of because of the way they look, act or live their life.

Real Life Examples How Obesity Can Cause You To Feel Depressed 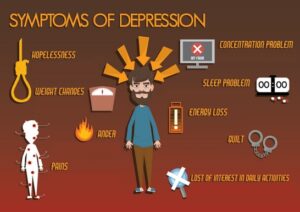 While its easy to say that obesity can cause you to feel depressed, without experiencing it yourself its hard to understand. While this list of examples could be as a long as a book, here’s a few examples I’ve personally been through that tend to play on my emotions as a direct result of my weight.

All in all, being obese can make you feel quite down about just about every aspect of your life. When you feel insecure and scared of just about anything involving chairs, you become pretty much a hermit, which can lead to depression. So its easy to see how being overweight can bring on depression with just the simple things in life.

To further enlighten the importance of this correlation, we are now going to look at a few statistics to determine the true connection between obesity and depression. 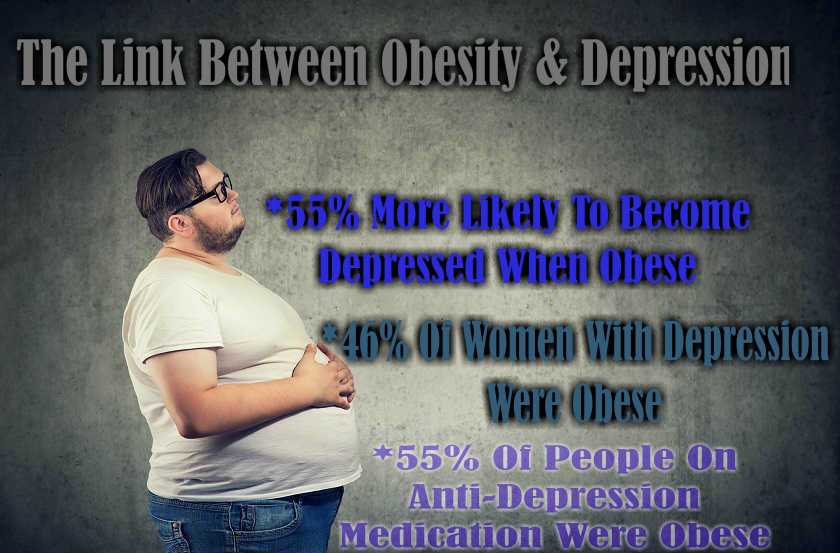 As we mentioned earlier, obesity is a massive problem in America among many other countries. But is there really a strong a correlation between obesity and depression, or is it that we as humans are naturally depressive people? Let’s find out.

As you know, obesity is linked with a wide variety of health issues. This includes but is not limited to:

Interestingly enough, each of these symptoms has been linked to an increased risk of depression. In fact, people who are obese are 55 percent likelier to experience depression. As you can see, obesity in it of itself doesn’t cause all depression. The side effects of obesity can also be a significant contributor towards depression.

Finally, a recent study conducted by the University of South Australia and University of Exeter has revealed some interesting information.

This study examined nearly 50,000 people with depression and compared them to a control group of 290,000 people. The final results of the study indicated that even more than the physical impacts of obesity, the mental impacts may cause depression.

This study determined that people with genes prone to obesity but not diseases had just as high of a risk of depression. What does this indicate? This study articulates that our psychological state of mind has the largest impact on whether we feel depressed if we are overweight.

Why Does Depression Cause Weight Gain?

First, keep in mind that those who are depressed often times lose or gain weight. For our purposes, we will look specifically at why does depression cause weight gain.

A study conducted demonstrated the link between depression and weight gain. Their study concluded that those with depression were significantly more likely to gain weight and that obese people were much more likely to experience depression, especially Americans.

But why is this phenomenon true? Often times, depression is associated with a lack of motivation, sluggishness, and a desperate desire to find something to help cope.

We Eat Our Emotions 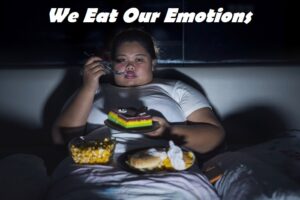 Many people resort to eating loads of food, giving them satisfaction in the moment. Most of us turn to food as a way of dealing with our problems. I’m sure you have heard the saying ‘we eat our emotion’s and this rings so true.

When you are feeling down or depressed, the temptation to eat that chocolate bar or tub of ice cream becomes to much to handle. Giving into food and eating your emotions is easier than resisting the temptation while battling the depression.

While at the time, eating the excessive food seems easier, in the long run it is contributing to you becoming overweight. When depression lasts for a long time, you will start to notice the direct result around your hips, belly and thighs.

But it is certainly not easy being strong when you are emotionally at your weakest. Breaking the cycle of stuffing your emotions with food is very hard to do. Seeking external help is always the best way to combat this situation.

Can Depression Medication Cause Weight Gain? 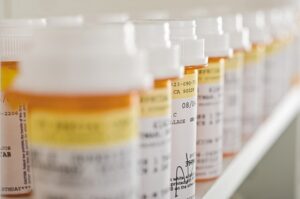 Unfortunately one of the side effects associated with nearly all antidepressant medications is weight gain. Obviously, some people are more prone to weight gain while taking antidepressants.

In general, a few depressants that seem to be most likely to promote weight gain include: Remeron, Tofranil, Nardil, Pexeva and a few others. Keep in mind, just because someone gains weight while they are on antidepressants does not mean it is because of the medication.

It could be due to lack of exercise, poor eating habits, and other factors. Consult with your Doctor first with any doubts and questions you may have. Never rely on answer from the Google search results. This can and will cause your head to spin with self doubt, insecurities and even deter you from seeking help.

The Link Between Depression And Weight Gain

I would like to conclude this article by giving you a feeling of optimism if you are struggling from depression, weight gain or both. Although depression and weight gain can seem like an endless cycle, there are ways to combat it.

First of all, it’s valuable to change your mental outlook on situations. Your brain is a powerful tool, by convincing yourself that a situation will be negative, it likely will be.

Therefore, try to have a positive mental outlook towards your life. Additionally, to combat both depression and anxiety, exercise outdoors. Breathing the fresh air can help you release stress while allowing yourself to get healthier.

Lastly, you can consult with your primary care physician to explain your situation and develop a solution.

Hopefully, you have learned some valuable information about the link between depression and weight gain. Know that whatever you’re battling, you are not alone!

If obesity is new to you, one of the first things you notice once you have piled on the weight, besides clothes […]

While it may be obvious to many that being overweight can cause shortness of breathe, for some it’s an unknown side affect […]

Linking Positive Thinking, Positive Affirmations And Weight Loss There are a lot of people who want to lose weight, but many .people […]