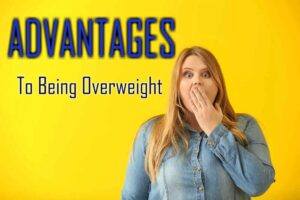 People who are overweight have often been looked down on by the society and while you do tend to get use to it, it’s not something we particularly enjoy. So to turn things around a little, I’ve decided to exhaust a list of the advantages to being overweight. Why?. Simply put, it makes us feel better, so why not I say.

While there are some who have been born with conditions that lead to being overweight, for the most part weight gain is something that has grown over time for many. It is often deemed that us big people eat and drink a heck of a lot more than we should and this is the reason behind being obese or overweight.

Society has us all to believe its from a lack of exercise and you grow bigger because excess fats begin to form in your body. Overweight people are therefore criticized and often bullied in what feels like an uncalled for war.

The way I see it is that according to studies, 2 out of 3 people are either overweight or obese in America. So we are not exactly the minority, or the odd ones out. So whats with all the shaming and fat jokes?.

While they can shame us all they like, little do they realize that being overweight has its advantages. So lets turn that negativity into something more positive and have a closer look at some advantages of being heavier than whats deemed ‘normal’.

Fun Things About Being Bigger Than Everyone Else

Some people boast about a 6 pack, I boast about my portable drink and food holder, i;e keg. The stomach can make for a great place to rest food and drinks on while sitting down. Skinny people certainly don’t have this advantage.

When your a big person crowds become less of an issue. People typically move out of your way when they are walking head on. When in a crowded event like a festival, being large is certainly an advantage. Having the size factor helps to make pathways through large crowds easier for your smaller friends to follow closely behind.

Some people get intimidated by the size of someone. This can be an advantage in many scenarios. While we may not be the strongest people in the world, the shear size of us makes us a walking wrecking ball when needed.

While many skinny and average size people take to bullying via verbal abuse, when it comes down to it, we have the physical presence to turn the tables if needed. Not many skinny people would want to take on a 300 pound angry man.

Eat Whatever You Want 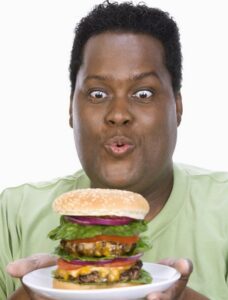 While we all know the associated risks with eating too much of the foods that make you obese, as an overweight person I find it’s easier to care less. By this I mean; a skinny person may get upset about eating 5 peanut m&m’s and I’m quite content eating more.

While this is a temporary advantage, it’s still enjoyable nonetheless. One should always watch what they eat and how much they are eating to be healthy.

Health Benefits Of Being Overweight 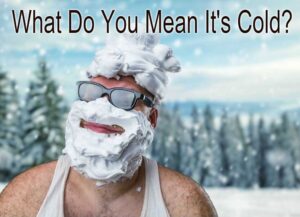 Overweight people have more fat cells around the body and these cells act as the bodies insulation. It’s found that people with a higher BMI have a better core insulation due to the extra layer of fat.

So do overweight people feel the cold less?.

Scientists have discovered that overweight swimmers are less likely to suffer hypothermia due to the greater BMI. The extra layer of body fat helps to keep them warm and insulate the body core temperature.

This is also found to be true with people that suffer from cardiac arrest and need therapeutic hypothermia as treatment where the brain is starved of inflammation and injury to the brain. Obese people are harder to force hypothermia on as a result of the body core temperature being warmer. So this can actually be a negative for the bigger person.

But its not uncommon for a larger person to feel colder than someone of average build. While the internal body core temperature may be higher, it’s the skin of the obese person sending cold signals to the brain. The lower skin temperature can make you feel colder than what you actually are.

When you look at most plump people, you would think that they are not the most active individuals and often without enough energy to do many of the things thinner people can do.

I know personally I find myself getting tired from being overweight. But this too is also a lifestyle combination which leads me to being tired all the time. However, there are numerous fat cells in their bodies that help to increase the energy levels.

When your energy levels are constantly on the increase, it means that there is good flow of blood in your body and your heart is pumping at the correct rate. This allows for more activity from the body. Also, increased energy levels help to keep the mind alert.

But it’s also important that your body doesn’t store too much energy, because it turns excess calories into fat. So taking advantage of this energy boost is certainly a good idea.

Reduced Chances Of Having Dementia

When you are overweight, people will associate you with all sorts of sicknesses that even aged people suffer from. One new found advantage about being obese is that regardless your age, you may be less likely to feel the attack of dementia.

As found in previous research, dementia has been linked to obesity. But recent studies have shown the opposite affect. This recent study has shown that overweight people are up to 30% less likely to suffer dementia, while a 34% increased chance for skinny people. So to me this means a little extra meat on your bones is not going to harm your memory. 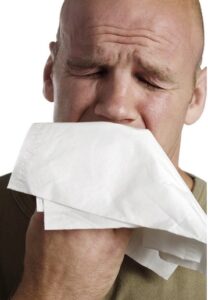 Fat is what is doing all the magic in your body. When a normal person’s body is attacked by germs, the infectious cells spread so fast leading to extremely severe illnesses that may reduce the lifespan of the individual.

However, it is different with an overweight person. The infectious cells from the germs are quickly stopped from spreading by the fat found in the body. Whenever an overweight person fall sick, they have higher chances of quick recovery than the normal person. Remember, the fats help to increase the energy levels in the body which boost the immune system as well.

As quoted here “To some extent, extra fat can provide a crucial boost so you can bounce back faster.”

It is highly likely that an overweight person will experience many forms sicknesses. However, the body contains the fat tissues and the hormones released from it help to improve the defense mechanism of the body and this helps to fight any effects that the sicknesses may have.

Given the fact that overweight people are more likely to get sick, fat can help to reduce the chances of death caused by various diseases in the body. 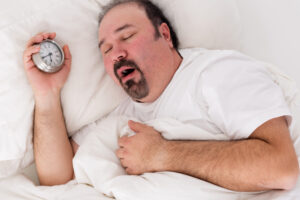 Going to the gym does not necessarily make you better in bed. Sure you may look better and more attractive. In fact, the overweight person who is often looked down upon on everything makes the game feel better in the bedroom.

The overweight person is more advantaged when it comes to physical harm as compared to the smaller person. A simple injury from a fall is more likely to affect the smaller person more because their physic has no protective mechanism.

However, with the obese person, you will realize that the many layer of fats act as a protective shield. Should a smaller person be stabbed, chances are that they can die from the first instance of stabbing? This is not always the case with the overweight person. Multiple stab wounds need to reach the target before significant harm can be felt. Not that anyone should ever be stabbed, but its good to know our body has given us an extra layer of security.

When you are overweight, your fat layers can prevent you from experiencing intense pain of the joints. The problem with infected joints is that it causes pain all over the body. This means that movement and functionality of the body will be deterred.

However, with an overweight Male, chances are you will not have to worry so much about the rheumatoid arthritis. According to this study, overweight men are up to 63% less likely to obtain musculoskeletal disorder.

But what is interesting is that an extra 10 pounds of body weight can cause 40 lbs of additional pressure on the joints like the knees. So naturally you would think that obese people are doing sever damage to their knees.

But in this study, it was shown that overweight people showed less damage on x-rays compared to thinner RA sufferers. The reason for this is said to be the extra fat cells reduce the harm of the inflammatory protein which is made by the fat cells. However levels of this inflammatory protein are higher with skinny people compared to obese people. The extra fat seems to act like a protective barrier for the heavier person.

While It Has It’s Advantages, Obesity Kills 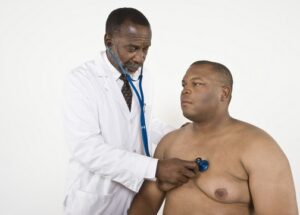 The advantages to being overweight look like they can complement our health to some extent. However, even with the above mentioned benefits it does not mean that the overweight person is going to live a life of quality.

Even with protection from diseases and injuries, complications can still arise which may be more lethal and harmful to the body than the just mentioned diseases that the layer of fat gets to protect the body from.

So, Is Being Overweight A Good Thing?

Is it healthy to be overweight?. This is something you have to take up with your Doctor if you are in the slightest bit concerned. But what we can say with clarity is that there has been harsh and unfair judgement that has been passed on all the overweight people for too long.

It’s your body and your health, what you do with it is your concern. But there may come a time when you feel as tho you are too overweight and its affecting your lifestyle and health. This is when you need to take it more seriously and look more into the health risks of obesity.

The disadvantages of being overweight certainly outweigh the positives. But this is a personal adventure and one that other people should not stick there nose in. At the end of the day, we all want to feel happy on the inside and the outside regardless of how much we weigh. But if your weight’s affecting your happiness then steps need to be taken.

There’s a lot that goes into making these heavy-duty massage tables listed below, and there are certain things that you need to […] 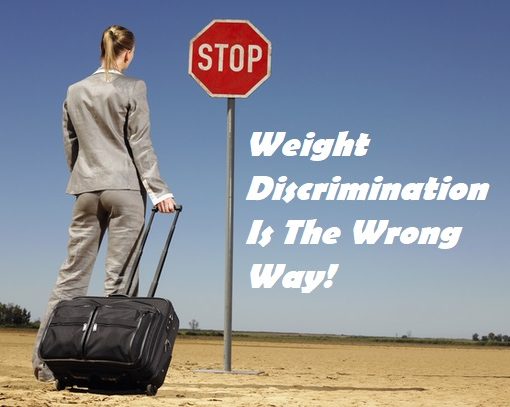 We all come from different walks of life yet sadly we all have one thing in common. That is having dealt with […]

The size of my Wife has always deterred her from participating in one of the best dress ups of the year, Halloween. […]

Obesity affects millions of people around the world. It is a growing problem that has resulted in a host of chronic illnesses […]